Home NewsSee what we were doing back in 1994. 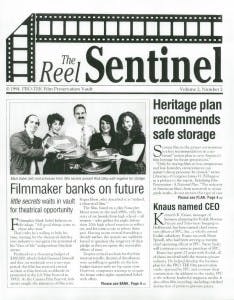 Filmmaker Mark Sobel believes in the adage, “All good things come to those who wait.”

That’s why he’s willing to bide his time, waiting for the theatrical distribution industry to recognize the potential of his “slice-of-life” independent film little secrets.

Produced on a shoestring budget of $100,000, which Sobel financed himself and shot on weekends over a tw-year period, the film has received critical acclaim at film festivals worldwide (it premiered at the LA Film Festival in 1991). At the Cannes Film Festival, little secrets caught the attention of film critic Roger Ebert, who described it as “indeed, a theatrical film.”

The film, based on a play Nancylee Myatt wrote in the mid-1980s, tells the story of six friends from high school – all women – who gather the night before their 10th high school reunion to reflect on, and for some to try to relive, their past. Having sworn eternal friendship a decade earlier, the women are suddenly forced to question the longevity of their pledge as they recognize the inevitable effects of time.

Despite critical acclaim for the film internationally, theatrical distributors were unwilling to gamble on the low-budget feature with no big name stars. However, companies wanting to acquire the home video rights inundated Sobel with offers… Read the full news letter here.