From Triage To Media Curation, Part 2: “Hollywood Takes To The Air”

From Triage To Media Curation, Part 2: “Hollywood Takes To The Air”

On August 14-17, 2014,  the Academy of Motion Picture Arts and Sciences will host “HOLLYWOOD TAKES TO THE AIR: THE ILLUSION OF FLIGHT” a retrospective and examination of aviation history in cinema. Hosted by the chairs of the Science and Technology Council, Oscar-winners Ben Burtt and Craig Barron, the show will screen several Hollywood film classics, such as “TWELVE O’CLOCK HIGH” and “THE RIGHT STUFF.” Opening night will spotlight newly discovered behind-the-scenes images of special effects work, including unbelievable stunt-piloting, intricate airplane miniatures, detailed matte paintings and rare outtakes. Many of these images exist now as a direct result of the work of the PRO-TEK Nitrate team and LAC Group. 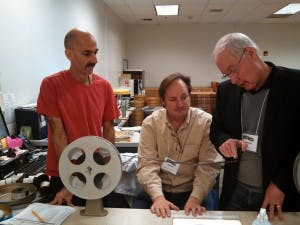 The PRO-TEK Nitrate team is proud of its unique mission of taking clients’ damaged and unidentified assets and bringing them back to life. Millions of feet of unmarked Nitrate Film Negative, some of it nearly 100-years old and much of it in need of repair before identification could take place, were placed in our care. Over the course of many months, hundreds of hours of new images from motion picture classics have been brought back to audiences, added to stock footage libraries and used to create new interest in previously held assets for our clients. Much of this material needed more than repair and identification – it often needed a deeper analysis of both image content and quality as well as the images’ history and relative rarity or not. Looking deeper at the material we were able to resuscitate it and bring to the surface otherwise hidden value. This is one of the goals of this project; bring value to unknown and/or forgotten images.

The staff at PRO-TEK does the deep research and uses the institutional knowledge that then leads to a more contextual gathering and presenting of metadata. More results of this approach by the PRO-TEK Nitrate team could be seen in the April, 2014 showing of “THE ADVENTURES OF ROBIN HOOD” during this year’s TURNER CLASSIC MOVIES FESTIVAL, in which rare outtakes and previously unseen footage, some of it discovered by the PRO-TEK team, was screened to a sold-out audience. For the PRO-TEK Nitrate team and LAC Group, we take pride in not just saving rare and delicate assets, but also being able to apply our experience to these assets in unique ways.