Four European theater owner/programmers have banded together to invite film restorationist Dave Strohmaier and his production partner, PRO-TEK Still Archives Manager, Randy Gitsch, to screen some of their digitally restored 3-panel Cinerama travelogues, 70mm Cinerama features and short-subjects in each of their cinemas in Karlsruhe and Dusseldorf, Germany, Innsbruck, Austria and Oslo, Norway.

Strohmaier and Gitsch have digitally re-mastered and re-copyrighted these widescreen titles, making them commercially viable once again, and are a part of their newly released DVD/Blu-ray release promotion. The now christened “2015 European Cinerama Festival Tour” will commence at the Cinerama Schauberg theater in Karlsruhe, on April 18 and 19. The tour then travels to Innsbruck, for a festival at the Leo Kino from April 23-26. The next stop is back in Germany, from April 30 through May 3, for a 3rd festival of films at the Metropol Dusseldorfer Filmkunstkino. Their last stop will be in Oslo, where they’ll screen in the Cinemateket from May 6 through May 9.

The finale screening will be a double-feature event, with ticket buying filmgoers getting a cruise in the Oslo fjord on the Christian Radich sail training vessel. The ship is the centerpiece and veritable star of the Cinerama-release picture to be screened just prior to the cruise, “Windjammer: The Voyage of the Christian Radich”.

Additionally, while in Austria, Strohmaier and Gitsch will make a special presentation to Film Studies students in the Department of American Studies at Innsbruck University. 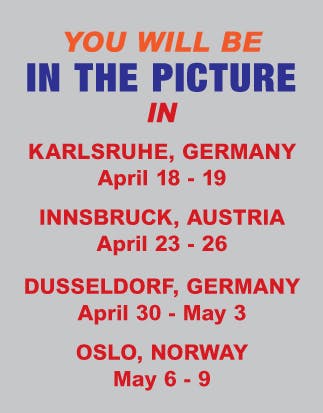