Why it's too much for competitive intelligence research

Competitive intelligence experts pull together information from a variety of resources. The Bloomberg terminal – one of those resources – is a mainstay in the financial industry and the subject of current debate and conjecture about its future.

The Bloomberg terminal (actual service name is Bloomberg Professional) is dedicated to financial data and news. While the system can be found in the research departments and competitive intelligence groups at some major law firms and corporations, it was developed for finance and investment professionals. Most CI professionals working in law and business would say that the terminals are too much – too many features and too much money for capabilities that are not useful to them, and a flood of real-time data on financial markets that is more noise than signal. Yet in a recent sampling of law library and marketing professionals we asked about their use of more than twenty information resources that included Bloomberg Terminal, and a few said they used it occasionally.

I went to our own professionals for their take, and here’s what they had to say:

“I used Bloomberg Professional at another law firm I worked for, one that was deeply entrenched in the financial industry but I don’t have access to it now. Besides the expense, the Bloomberg terminal is simply not well-integrated into typical CI workflow processes. It’s a tool for traders, not researchers. Its specialty is market data and news feeds that are updated constantly and immediately available. You can pull data into an Excel spreadsheet, but it’s generally not easy to incorporate information into reports.”

And from Chase Cost Management, our spend management consulting business:

“The Financial Times captured the good, the bad and the ugly of the Bloomberg terminal in a recent article, calling it clunky, costly, addictive and ubiquitous. The terminals have become addictive, even to some CI researchers I’m sure. Yet I wonder if the one-stop-shopping nature means they aren’t doing the objective, first-tier research and analysis. Instead of turning to reports and announcements issued directly by the SEC or companies themselves, they may be relying on Bloomberg summaries. As for the cost, it’s becoming increasingly difficult to justify, especially with good, less expensive resources available for financial data.”

Color-coded keyboards for traders, not researchers 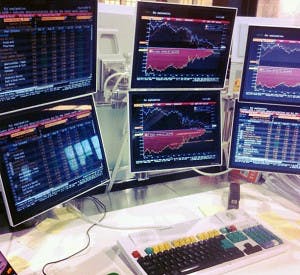 One of the distinguishing features of Bloomberg Professional is that it’s more than a source of financial data and news – it’s a complete system, including specialized hardware. A color-coded keyboard replaces standard function keys (F1, F2, Etc.) with uniquely programmed keys like EQUITY and CURNCY. Until it offers keys like PEOPLE or DEALS, CI researchers don’t have much use for the Bloomberg keyboard.

Another distinguishing feature is the online chat/instant messaging capability that allows members to communicate and share information within this network. You could call it the Facebook of the financial community. Online messaging is a key advantage of the Bloomberg system, yet a newly released competitor called Symphony, created by Goldman Sachs, is taking aim at that function. You can read more on that in this New York Times coverage.

Competitive Intelligence professionals have other resources for financial news, including first-level sources as mentioned by Patrick – the SEC or corporations themselves if they are publicly held, or resources like PrivCo for privately-held businesses.

Thomson One is a service of Thomson Reuters that combines corporate information from across the TR network for identifying opportunities, monitoring market developments and tracking clients, prospects and peers. The subscription costs are less than a Bloomberg terminal and the features and capabilities were designed for corporate intelligence. Brian said he generally turns to Thomson One, which delivers the financial content he needs in a way that better matches his requirements, plus it’s better for the bottom line.

“Except for firms that are focused on the financial industry and need access to some arcane financial data, most law firms cannot justify the expense of Bloomberg Professional, especially when resources like Thomson One are available.”

Another one of our research analysts has reported questions being posted on library/research forums about Money.net, a new service headed by former Bloomberg LP executive Morgan Downey. Money.net is available as a standalone application or a cloud-based application for a flat $95 per month. Other products are available that I won’t get into, except to say that as collection budgets are being cut in law libraries and other libraries and information centers everywhere, the need to assess all the options to match content with specific needs has never been more important. More services, more features and more data do not translate to better competitive intelligence. As I mentioned earlier, often they simply add more noise for busy researchers to cut through.

As active users and managers of these resources for our own business, as well as our clients, LAC Group will continue to identify and track the most worthy news and information contenders.

Is your competitive intelligence being used?

You’ve requested research into the competition or other companies. The competitive intelligence (CI) report you receive answers all the questions…

Last week I talked about secondary research, which is the investigation of information that already exists – it’s the most…