The state of the contingent and alternative workforce

Home BlogTalent servicesThe state of the contingent and alternative workforce

The US Bureau of Labor Statistics (BLS) recently released a summary on its findings as to the state of contingent and alternative employment arrangements through 2017. It’s an interesting view of the segment of the labor force that has pursued non-traditional working arrangements.

According to BLS, a contingent worker encompasses a range of people (the definition has varying levels of strictness) who do not have an implicit or explicit contract for ongoing employment, and who generally don’t expect their employment to continue beyond a year. At its broadest definition, it includes independent contractors, temps and other contract workers who only expect to be employed for a year or less. This category of workers comprises 3.8% of the employed population, or 5.9 million individuals. 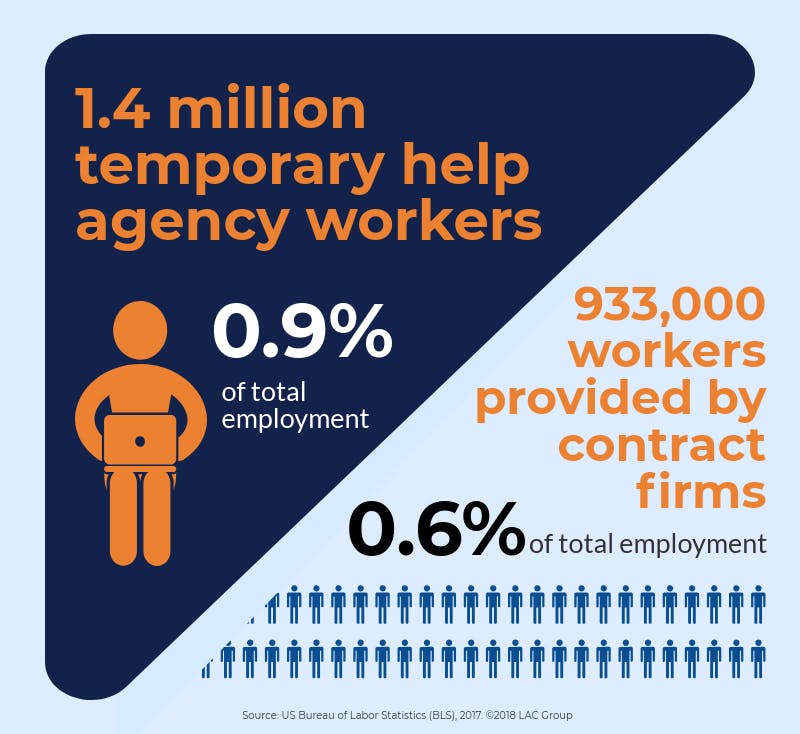 The definition of alternative employment arrangements includes independent contractors (such as consultants and freelancers), on-call workers and contract workers. The largest group—independent contractors—makes up 6.9% of total employment, or 10.6 million individuals. The smallest group of alternative workers are contract workers who make up only 0.6% of total employment, or slightly under one million individuals.

Contract workers are those who work for a contract service company, usually work for only one customer and usually work at the customer’s worksite. This refers to individuals who are employed by firms who contract out their workers’ services, such as LAC Group, contrasted with firms that provide services under contract, such as advertising agencies and law firms. 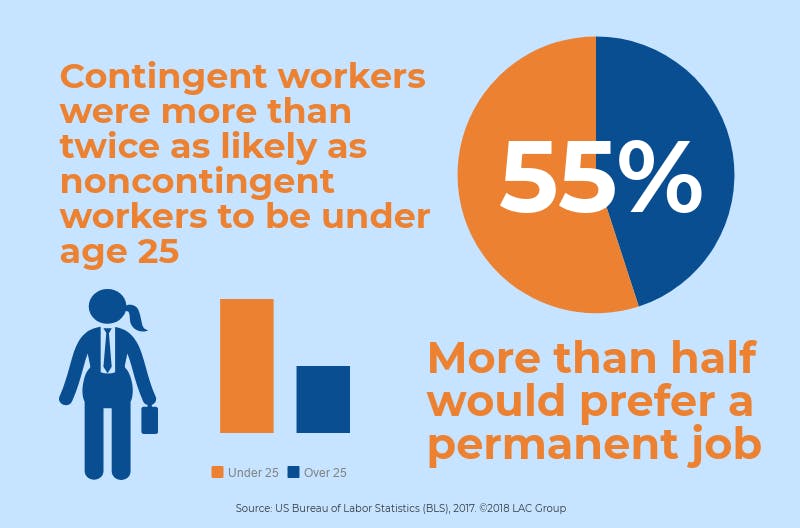 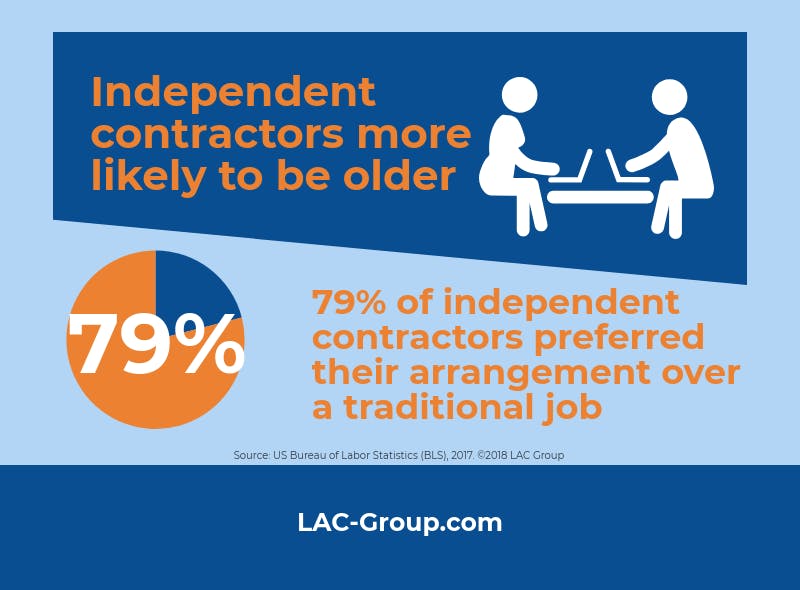 Independent contractors/freelancers are generally older (55+) and predominantly white and male. They’re also more likely to provide professional and business services (in addition to construction services.) It’s easy to picture a scenario where a person who has spent most of his professional life working for someone else comes to the realization that he’d prefer the flexibility and autonomy of striking out on his own. He’s also probably more financially stable than someone earlier in their career, and can afford to take some risks.

Contract workers are concentrated in manufacturing, professional and service occupations—such as computer specialists—and security guards. This area has a high overlap with the contingent workforce—15% of contractors are likely to be contingent, where their assignments have an expectation of ending within a year.

In the technical notes for the survey, BLS explains that it asked additional questions around whether respondents found work through mobile applications and were paid through those apps. This speaks to the agency’s attempt to start quantifying the gig economy—where freelancers use apps to generate additional income—think Uber, Lyft and AirBnB.

To date, BLS has little data on this phenomenon, although a study conducted by Intuit found that freelancers now comprise about 34% of the workforce and are expected to grow to 43% by the year 2020. Note that this study included all freelance workers, even self-employed professionals like plumbers and electricians. Looking at the tech-enabled gig workforce, in 2017 there were about 4 million quintessential gig workers, and that segment is expected to grow to 7.7 million workers by 2020.

For anyone deciding whether alternative work arrangements are in their future, one important consideration is whether they’ll receive employer-provided benefits. Fifty-three percent of workers in traditional, 9-5 arrangements received health insurance benefits through their employers, whereas 41% of contract company workers had employer-provided health insurance, compared with 28% of on-call workers and only 13% of temporary help agency workers. Contract company workers were almost equal with traditional employees when it came to being eligible for employer-provided pension or retirement plans—48% compared to 51%.

The alternative workforce is likely to continue growing, and presents both challenges and opportunities to employers in a time of low unemployment. Organizational leaders who take new approaches, such as looking beyond traditional resumes and enterprise employment models can find untapped pools of talent. For example, when filling a new position, requiring a college degree could overlook workers who are specialized in a particular skill, trade or experience.

Turning to contract workers to fill long or short-term needs may make sense where a specialized skill is needed quickly, or as a stopgap before finding a permanent hire. It also makes sense financially when extra resources are needed but overhead budgets are stretched. It allows organizations to fine-tune their mix of employees to meet both budgetary and operational needs.

We provide an important recruiting service for clients, while also giving contract workers stability and variety in their assignments. We pride ourselves on providing a generous set of benefits to our contract workers, including health, vision and dental coverage in addition to 401(k), vacation and bonuses. For more information on what it’s like to work with LAC Group, visit this page.

We’re hiring! That is a permanent menu item on our website and a button on every edition of our e-newsletter,…

Read more
State of the State

By Deborah Schwarz, CEO, LAC Group In recent years, we have grown into a much larger and diverse organization, and…