Information Overload is not a new concept or even a recent phenomenon. As far back as the first century AD, Roman philosopher Seneca said that “the abundance of books is distraction” – although he said it much more poetically as “distringit librorum multitude”.

The term “information overload” was penned in the 20th century, by American social scientist Bertram Myron Gross in his 1964 book, The Managing of Organizations: The Administrative Struggle. Then futurist Alvin Toffler expounded on the concept and included the phrase in his seminal work of 1970, Future Shock.

Once an academic concept, Information Overload is now firmly planted in popular culture, not to mention a growing problem for individuals and organizations alike.

TMI – Too Much Information?

Information growth moves in lockstep with advances in technology. Some technologies, like the printing press and the photocopier, have had a profound impact; yet it’s the twin developments of digitization and the internet that are bringing warp speed to the process. Today, information overload has reached glut proportions, resulting in clever new descriptions like “infobesity” and “infoxication” among others.

First, there’s big data – the operational and transactional data being generated daily in some amount of bytes that are too enormous to fathom. Then there’s a world population of 7 billion people, more of whom are producing and disseminating (and consuming) information than ever before, thanks to increasingly available internet access and devices like smart phones.

According to IBM, this adds up to over two quintillion bytes of data every day.  To put this in human perspective, 90% of the data in the world today has been created in the last two years alone. We may have reached the tipping point – the point of diminishing returns, when more information is simply more and not ‘more better’.

Yet even as we are drowning in data, the human thirst for knowledge persists. How do we find insights and inspiration in a world of TMI?

We look back again, this time to 18th century French Philosopher Denis Diderot, who in 1755 edited Encyclopédie, a general encyclopedia in which he meant to capture and disseminate the world’s knowledge for the public and future generations. Yet even he had his doubts about this lofty information-sharing goal: 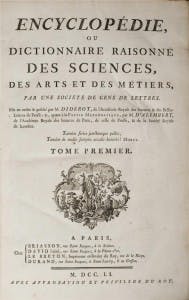 …one can predict that a time will come when it will be almost as difficult to learn anything from books as from the direct study of the whole universe. It will be almost as convenient to search for some bit of truth concealed in nature as it will be to find it hidden away in an immense multitude of bound volumes.

Let’s update Diderot, who could foresee only volumes of bound books and imagine truth being concealed in nature and the physical world, not a virtual world. Today’s bits of truth are hidden away in an immense multitude of increasingly digital information.

This is the basis of information curation, or being able to identify and separate the worthy from the worthless, based on whatever criteria apply in a given situation. Information curation is at the heart of what we do at LAC Group. From our library roots, we have expanded to disciplines that are seemingly distinct and diverse – like Spend Management and Film Archiving – yet they share a common thread. The commonality is identifying unique “bits of truth” that are actionable or otherwise important to an organization, and sparking insights to fuel the imagination in ways that lead to greater value.

If Seneca thought “the abundance of books” was distracting in the 1st century and Diderot thought the “immense multitude of bound volumes” was problematic in the 18th century, both must be rolling over in their graves at the multitude of information we are contending with in the 21st century.

I think we can agree that quntillion bytes worth of information being produced daily is becoming a distraction. It absorbs precious attention and time in ways that are not so precious.

The answer lies not in turning off the flow of information, but controlling information overload – honing our ability to focus and discern our own bits of truth and ignore everything else. We have demonstrated our technological prowess in creating and capturing massive volumes of information. Today’s priority and urgency lie in our prowess to control it.

Information is coming in many forms and being used for many purposes, resulting in many types of management systems. The…